An elf-born tiefling witch in pursuit of all knowledge

[2 actions] Breath weapon
Arcane, Evocation, Poison
Frequency once per hour; Effect Canter breathes euphoric gas in a 10-foot cone. Each creature in the area must attempt a Fortitude save against your class DC or spell DC, whichever is higher. A creature that fails its save is stupefied 2 and slowed 1 for 1d4 rounds; on a critical failure, the duration is 1 minute.

DESCRIPTION
With her lilac skin, black horns, yellow pupils, and thin tail, Nasti doesn’t look like anyone else. Her elven ears and Tien eyes are her only non-tiefling features. She’s tattooed her forehead with her personal sigil, just above a jagged scar across the bridge of her nose. She pins her hair back and adorns her ears and horns with gaudy costume jewelry; a simple choker encircles her neck. She has four fingers on her left hand.

She dresses in the style of Minkai, in practical traveling clothes she designed for herself, but accents them with a gaudy and extravagant cloak trimmed with fur and brilliant gems. She carries an gnarled hawthorn staff.

Nasti speaks with an Ustalavic accent; her voice has a bit of smoke and honey to it. The meat on her bones shows her resentment of physical labor, but her movements are deft, her eyes always searching her surroundings. She shows a bit too much of her pointed teeth when she smiles, making even her joy seem threatening.

Her constant companion, Canter, is a black dragon the size of a cat, so dark it almost hurts to look at him, whose eyes shine green in most light. As a former cat, Canter retains many feline characteristics, such as sleek fur and a tranquilizing purr.

BACKGROUND
Nastassia “Nasti” Rainstrider-Kaneshiro was born in the Ustalavic capital of Caliphas on 26 Neth (XI) 4685 AR. Her parents, Elitae Rainstrider and Saburo Kaneshiro, belonged to the Esoteric Order of the Palatine Eye, who kept a stronghold at the Harady Theater. Surprised by their tiefling child, they never had another.

Nasti barely remembers her parents, for they died on Order business in Feldgrau at the end of the War Without Rivals, when she was eight years old. They’d left Nasti in the care of Valeska, the half-orc handywoman who kept up the machinery at the theater. Ostracized by her tribe in Belkzen for being able to pass for human, Valeska made her home among humans, and recognized a kindred spirit in Nasti.

Though she excelled in her occult studies, Nasti never found acceptance with anyone besides Valeska, and was persecuted until she ran away with the half-formed thought of going to Lastwall, perhaps to join the Knights of Ozem.

She made a side trek into the forest between Caliphas and Grayce, where she had a fey experience that ended with swearing herself to Magdh. She returned to Haraday Theater as a witch, and the bullying ended.

Nasti continued her studies until 4718 AR, when adventurers thwarted the Dominion of the Black’s efforts to threaten Golarion via the Aucturn Enigma, with the aid of the Palatine Eye. With this great work concluded, the Eye assigned Nasti to be their eyes and ears in her mother’s homeland, so she left Caliphas for the Hold of Belkzen.

After arriving in the Valley of Obelisks, Nasti found her cousins Amaya and Jenova, and they went on many adventures, such as dealing with an amok otyugh. Now having dealt with the remains of Slaughtergarde, Nasti divides her attention between serving the Ebon Cabal, managing her goblin-staffed tailory the Loose Thread, and courting Chendrea the White, head of the Scrivener’s Guild.

PERSONALITY
Nasti has never felt like she’s belonged anywhere, and only Valeska, and now her cousins and extended family, have ever made her feel accepted. She wants to prove her worth to them – to everyone – but years of frustration have burdened her with anger and self-doubt. She is sure that Magdh has chosen her for some great purpose – but can’t figure out what that purpose is, or whether the Eldest can make mistakes.

This need to understand everything drives her. Creative, curious, and imaginative, Nasti ‘s mind packrats everything it can. in case it’ll be useful some day She is smarter than most people she meets; until recently, she was good at making sure they knew it.

Nasti has a bit of a temper, but years of enduring insults and prejudice have taught her to manage it. She’s not as disciplined when others are being bullied, though. Clamping down on her passions and sharp tongue has always been a struggle, but Canter and her cousins have helped her.

She finds that contemplation leads to melancholy, so she always has something going on – projects to research, scams to run. She needs something to focus on, or the feeling of worthlessness creeps back in. She is prone to bouts of pessimism, and hates to show mercy, forgiveness, trust, or respect to those who don’t deserve it.

Time spent with Amaya and Jenova have helped Nasti see past her own selfishness, if not move past it. She rarely gives her word, because now she’s serious about trying to keep it.

Nasti has little interest in the divine, but she finds Calistria’s doctrine compatible with her values, and wants to learn more about the new goddess Nocticula.

A lifetime of self-sufficiency and self-loathing have left her at a loss where romance is concerned. Nasti has noticed her feelings for some people now and again, but never acted on them, for she doesn’t expect anyone to reciprocate them. She’s often awkward and bashful around people she fancies. That’s all begun to change now, though.

THEME SONG
‘Rabbit Heart (Raise It Up).’ by Florence + the Machine

Amaya, cousin – She seems to like me, and I do sleep better knowing that she has my back. She’s a little reckless, which I get, but it comes from selflessness, which I don’t. She talks a lot, but I like to hear it. And she also respects silence, which makes her a good woman to sit and read with. She might be a kindred spirit if it weren’t for…
Jenova, cousin’s cousin – it’d be easy to just say “she’s my opposite,” but we’re alike, too. Neither of us asked to be cursed, even if her curse has an upside. She and Amaya both make me want to be a better woman, but somehow Nova makes me feel like maybe I can be. And maybe I can show her how to have a little fun once in a while. 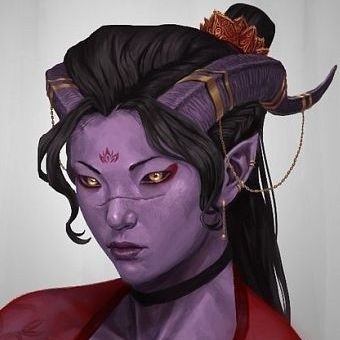