In a copse about five miles from Castle Surrinak is a simple hunting lodge that the Surrinak family uses each autumn. Fortunately, it is spring. The lodge’s front door is unlocked, and the inside is bare except for a stone hearth and chimney. It’s clean and maintained, but it feels creepy.

Referencing the map, the cousins investigate the fireplace. The lodge’s hearth is made of an old millstone that’s hinged and opens to reveal a stairway down. The dark path descends for about fifty feet, and light from below can be seen as a dim glow. Eschewing her everburning torch, Amaya proceeds down the stairs with the others close behind.

About fifteen feet from the bottom of the stairs, they pass beneath the ceiling of a room of gray stone. Two pale lavender-skinned warriors in scale mail have crossbows ready flanking the east end of this lozenge-shaped chamber. They guard a demon arch with glowing red-orange eyes and a violet miasma swirling in its mouth. Burnished copper double doors are set into the walls to the north and south. Tapestries hanging from the walls in this room depict horned, crimson-skinned humanoid warriors marching across volcanic mountains. 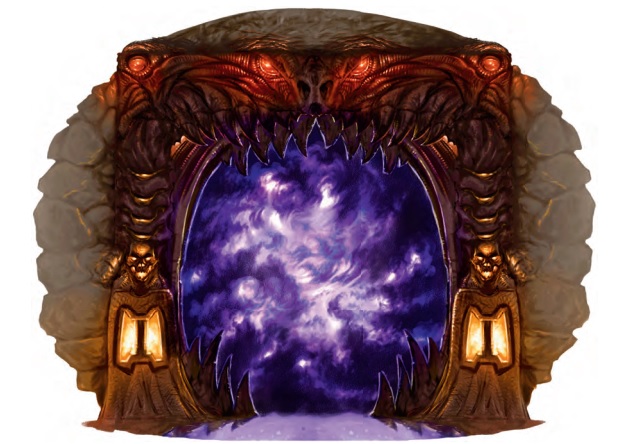 “You must be lost or stupid,” says one of the guards.

Amaya looks back at Nasti, who double-takes at her. “What? Shouldn’t we just fight ’em?”

Amaya shrugs and turns her attention back to the guards. “You wouldn’t want to surrender and make this easy on everyone would you?”

“Stupid, then,” the other guard concludes as the pair raise their crossbows.

Amaya draws her sword and advances on him, but he sidesteps her first overhead chop. Each of the half-drow is indirectly struck by Nasti’s electric arc, and one is caught in the crushing pressure of Nova’s interstellar void¬. He shivers and returns fire, striking the human with a crossbow bolt. His companion has less luck against Amaya, who shifts focus to attack the man who dared to shoot her cousin, injuring him deeply. Then Nasti takes control of the man’s shadow and has it strangle him to death. The other didn’t last much longer.

“Half-drow, huh?” says Nasti, considering the bodies. “Curiouser and more curious.” Behind her to the south she hears a sound from beyond the doors and calls to her cousins. “Heads up. They’re barring this door.”

Amaya nods and searches the bodies for clues, but aside from their arms and armor, the guards possessed nothing of note. Meanwhile, Nasti studies the swirling purple energy within the mouth of the demon arch. “Tell me that’s not an active gate to the Abyss,” says Nova, joining the tiefling to inspect the weird barrier. A quick glance with detect magic suggests illusion magic. After a minute or so, they decide it is meant to look and sound creepy but isn’t actively dangerous.

“I still don’t want to walk through it unless we don’t have any other options,” says Nova. “Take the door to the north?”

“What?” the familiar says.

They spend several more minutes resting while Amaya patches up Nova’s crossbow injury. Then the half-elf opens the northern doors to reveal a short hall leading to a T-intersection. “Left or right?” she asks.

“The familiar would say left, for reasons I don’t fully understand,” says Nasti.

“It seems inaccurate to say ‘the cat’ or ‘the dragon’…”

“Left it is,” says Amaya, ignoring the banter.

The left path turns north almost immediately and ends in another demon arch with violet energy in its mouth. As a precaution, they study it for a minute, determining it is much the same as the one in the entry chamber. “Let’s see what the other side has for us,” Amaya suggests.

The right-hand path also turns north and terminates in a different sort of demon arch. Its mouth contains a crackling curtain of flame cascading to the floor, blocking their view of what may lie beyond. Two empty glass vials lie abandoned on the floor nearby. 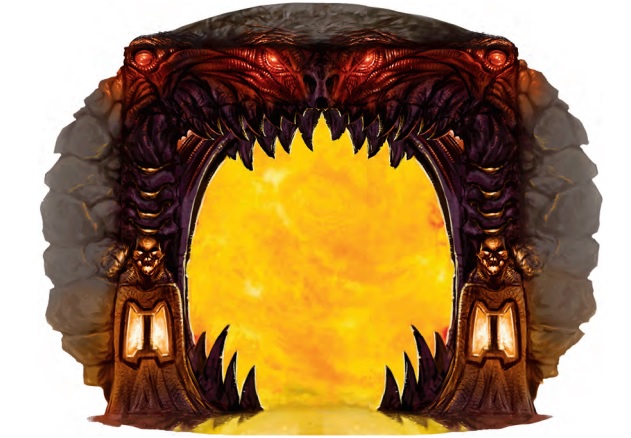 “Well, shit,” says Nasti. “I do have resist energy prepared.”

Nova sighs. “I guess we don’t have a choice but to walk through one of them. Which? I vote we don’t go through this one.”

“We can try the other ones first, anyway,” says Nasti. She is the first to walk through the violet miasma on the opposite side of the T-intersection. “Whoa!” she says, prompting the other two to follow nearly on her heels.

In the northeastern and northwestern corners of the room are massive statues of sinister elephants. Their trunks point downward, ending just above the surface of the water. They have spiked collars carved around their necks. In the middle of the room is a pool of still liquid. The pool has an iridescent, oily sheen on the surface, and they cannot tell how deep it is.

“I have an idea,” says Nasti, walking to the edge of the pool to examine the liquid.

“Is it a good one?” Amaya asks a moment before two small crossbow bolts strike the floor near the tiefling. “I guess not,” she mutters, glancing up to see the source of the missiles. Atop the elephants, she spies a pair of drow in dark leathers who are reloading hand crossbows.

The dark elves are swift, and one of the arrows from their next volley pierces Nasti’s arm, which starts bleeding very badly. The drow then drop off the elephants to the floor, hands on sheathed short swords. Nasti lashes out with lightning and retreats to the far corner to bleed some more.

Amaya engages with the nearer drow, her blade carving lines in her enemy’s flesh. Nova’s ray of frost finishes off the wounded dark elf, and the cousins shift their attention to the other. The remaining enemy sneers and chases Nasti, feinting before drawing a short sword and sticking it into the tiefling in one smooth motion.

Nasti draws her own blade and puts the rapier to work, using every scrap of training that Amaya has insisted upon. Her strikes are precise, if not as devastating as the half-elf’s bastard sword tends to be. “Oh Abyss TAKE you!” she shouts, even as the crossbow wound continues to bleed. Amaya moves to flank the drow and scores one blow, though the second is parried. Nova utters a spell, sending healing energy into Nasti, knitting some of her wounds. The drow steps away from Amaya and tries to continue the work of murdering Nasti, but the tiefling finds her defensive stance and avoids the dark elf’s flashing blade. Between her and Amaya, they bring down the stubborn enemy, then turn their attention to her bleeding.

“Did we win?” says Canter, poking his head out of the tiefling’s satchel. “That stuck deep, eh? Yikes.”

For several desperate moments, they try to use mundane medical means, but when that fails Nova loses patience and floods Nasti with healing power, completely restoring her.

“Gods damn. Thank you. Both of you.” She kicks the dead drow in the head, then immediately feels stupid and immature for doing it.

“These Drow are serious,” says Nova. “Nice work with that rapier though.”

“The training is paying off,” says Amaya.

Amaya puts her hand on Nasti’s shoulder. “Love you too, cous.” The tiefling tenses up for just a second from the contact then pats Amaya’s hand and kneels to search the bodies.

Nasti finds a small enchanted talisman that she determines as the cause of the bleeding she experienced. She explains to her cousins that the murderer’s knot can be affixed to a weapon and its magic expended to make a wound worse. She pockets the talisman and says, “Okay. Where was I?”

While Nasti returns to the side of the pool to examine the liquid, Amaya inspects the dire elephant statues. The trunks of the great stone beasts might once have been used to circulate the water in the pool, but considering it is now stagnant, they clearly no longer work.

“Something about the pool is magical. Transmutation,” says Nova, releasing her magical sight.

“Any idea what it is for?” asks Amaya.

“I wonder if they used this water in the vials to get through the flames,” suggests Nasti.

The cousins consider the fiery demon arch to the west and the violet demon arch to the south, where they had entered. It didn’t take long to decide they would try the violet arch in the entry room before attempting a burning arch. “They might have come up behind us,” says Nasti. “Best be cautious.”

Amaya leads the way through the violet arch east of the entrance stairs. In the next chamber, a mosaic depicting clawed footprints emerges from under copper double doors to the east, heads into the middle of the room, then turns south, where it disappears under double doors there. Of more immediate concern, two chameleons the size of horses are mounted by lavender-skinned elves in heavy armor who are carrying lances. They tip their lances in challenge!

“Die, chattel,” one says in accented Elven, charging forward on his lizard. Nova evades his lance, but when Amaya advances to engage, he takes the opportunity to stab her. She grits her teeth and strikes him back twice. Nova retreats a step and lets fly a ray of frost, but the spell sails over the first rider’s shoulder. Nasti looks past the rider into the chamber and evokes a small red bead that flies into the center of the room before exploding dramatically. Unfortunately, the fireball does little more than singe the riders and their reptile mounts.

The melee and spell battle continues, with Amaya slaying the first rider as it attempted a tactical retreat. The remaining rider did not long stand against the united cousins, and after the drow were bested, the oversized chameleons padded over to a mound of mushrooms and started easting.

“Wonder how they got those things down here,” says Nova.

“They came up from the depths of doom,” Nasti agrees.

“Oh…” says Nova. “Was kind of hoping this place wasn’t connected to that place.”

The ladies spend some time recovering from the encounter and treating wounds received. Afterward, finding nothing of use or note on the riders, Amaya listens at the eastern door. “Something is on the other side,” she says before opening the door.

Two corridors cross ahead of them, the mosaic footprints leading from a northern passageway into the intersection, where they turn west and head toward the cousins. Standing in the intersection are two burly hobgoblin crossbowmen in simple red breeches and tunics. Beyond them to the east, Nasti sees a female drow in form-fitting explorer’s garments lurking in the darkness of a collapsed hall. The dark elf has a naked rapier in one hand, and her free hand rests easily on a belt pouch. At the sight of the cousins, the woman flashes a vicious toothy grin.

Interlude: Number Eleven In Which Nasti Reveals a Secret