As before, Amaya rushes forward and swings her blade, but this time she strikes the giant with the flat side to subdue. Rock reaches down reflexively to cover the wound, and the half-elf can see there’s something wrong with his eyes. And then the massive tentacle forces itself out of his mouth! It flails about, but Amaya evades the unfortunate new appendage.

Nasti and Nova exchange a glance before blasting the mutant giant with fire and ice respectively. Despite the horror emerging from Rock’s mouth, Amaya still sympathizes with the big lug and continues bludgeoning him with her sword, a task it was not best designed for. In response, the tentacle smashes down into Amaya and seizes her, squeezing hard! “Oh god, he’s licking me,” she says. More magic from the family spellcasters follows, but Bizarro Rock remains standing long enough to try crushing Amaya one last time.

The half-elf weathers the embrace, then witch-fire scorches the tentacle. It releases Amaya as the giant falls senseless to the stones. Nasti then comes over to help Amaya disentangle herself.

“You okay? That is damn creepy,” Nova says.

Nova heals Amaya with magic before Nasti starts treating the half-elf’s wounds with more mundane methods. They watch the flaming arches nervously as they wait for her to feel well enough to continue. The tentacle issuing from Rock’s mouth twitches sporadically. “That’s just a reflex,” Nasti says, but she doesn’t sound like she believes it. Nova freezes it to the ground with a ray of frost. It stops moving, and Rock stops breathing.

“So, back to where we left off yesterday?” Amaya asks.

The steps west of the dragon tower descend to a landing terminating in a demon arch filled with the violet miasma. Amaya and Nova step through together to see a female gnoll bearing a flail and shield standing near a pair of red-furred, muscular gnolls in this chamber, which is clearly used to store armor. Wooden racks on the walls hold greaves, epaulets, chainmail, leather leggings, and other armor pieces. A stairway leads down from the northern part of this chamber.

Amaya dashes forward and decapitates the spellcaster before the other gnolls even have their weapons ready. Nasti crosses the miasma threshold, takes in the scene at a glance, and hits the ginger-gnolls with an electric arc. The singed creatures are still more incensed with Amaya and vent their anger in her direction. A flurry of falchions shows the gnolls half-elf blood. Nova heals Amaya, and in the next few moments, the gnolls are dead.

The cousins hear movement from down the stairs, but despite this Amaya tries to search the bodies. She is thus occupied when a new pair of gnolls charges up the stairs from below. Nasti evades the flashing blade of the first, but the second manages to read her reactions well enough to compensate and the tiefling starts to bleed.

Nova exchanges nightmares with one of the gnolls and sees flashes of cannibalistic savagery. The gnoll-pack eats this soldier’s parents when it was a mere cub. Having witnessed the tentacular horror afflicting poor Rock, the oracle shakes it off. Amaya stops looting to join the fight and ends one of the gnolls. The remaining foe pursues Nasti, but she ducks and weaves. Nova offers more healing, then Amaya shoves the gnoll through the miasma to get it away from Nasti.

The tiefling nods thanks and crosses the room, directing Canter – still in the stairwell – to breathe into the gnoll’s face. The familiar obliges, and the gnoll’s eyes cross as it inhales the euphoric vapor. Then the creature’s eyes narrow and it whirls on the psychotropic not-a-cat. Nova steps boldly through the demon arch and finds herself in melee range of the gnoll. With few options, she thumps him with her staff. Amaya’s blade finishes the job, and the cousins pause to catch their breath.

“Thank you,” Nasti says. “And thank you for healing the big baby.”

“Now he owes me.” Nova grins at Canter.

Nasti strains to make out the chanting coming from somewhere below – or beyond. Not wanting to give whoever it is more time to prepare, the cousins descend the steps into a rectangular room. The many stone tables here have hammers, pliers, and piles of unconnected chain links on them, as well as glowing runes on their edges. Another stairway in the north half of the room rises to a chamber above this one.

They emerge into a chamber that is the mirror image of the armor storage room to the south. Next to the northern wall is a carved wooden platform that has long wooden handles. Another gnoll warrior and three female spellcasters in the room snarl as the adventurers enter, weapons at the ready.

Amaya leads things off, but the prepared gnolls survive her initial onslaught. Nova evokes a deafening thunderclap that deafens the warrior and two of the spellcasters, though it does them far less injury than she hoped. The gnoll warrior strikes Amaya a glancing blow, then Nasti’s lightning bolt kills the most wounded cultist. A second pulls a blade and attacks Amaya. The third manages to cast a spell despite her deafness, conjuring a floating weapon to threaten the tiefling.

The spellcaster in melee fends off Amaya’s next flurry of attacks, and Nova exchanges nightmares with the cultist controlling the floating weapon. She sees a vision of losing control of a ritual to summon and bind demons to her will – and the bloody aftermath. The image stings, reminding her of the price of failure here. The gnoll warrior distracts Amaya with its sword then bites her, but the fight doesn’t much longer after that. Silence settles over this section of the Armory.

Nasti heads over to look at the device that the gnoll cultists were disassembling. An iron framework has been built atop the platform, and from it, many distended, shrunken heads hang. They chant in unison, speaking in a language none of the cousins understand. Suspended in midair above the center of the framework is the tip of one of the obelisks meant to protect the Valley. It’s floating upside down. 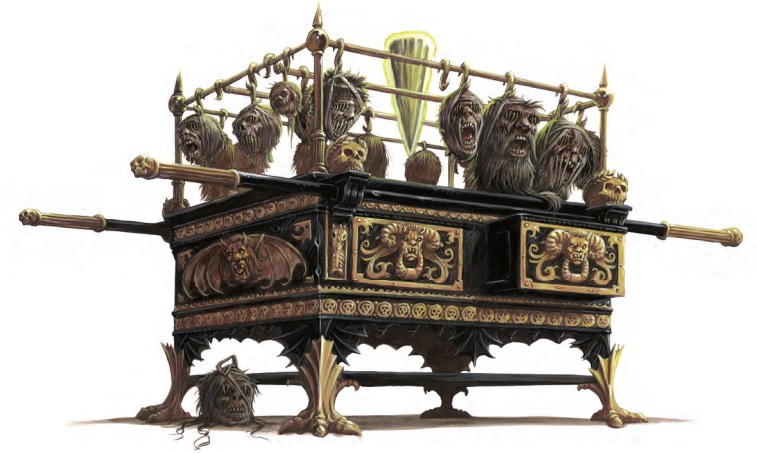 “A force for good, bound and reversed…” Nasti mutters. “I need it,” she says, loud enough to be heard clearly. She breaks her journal out and tries to transcribe the chanting phonetically.

“This … contraption. I believe it’s important for the operation of the gate.”

“Does the gate not work without it?”

“I’m not entirely sure, but I know it’s important.”

“Then we should disable it. Any idea how?”

“It’s what we came here to do right? Prevent the gate from being used.”

“This is about her new friends up north,” Canter says.

“Asshole!” Nasti glares at her familiar.

“What are you not telling us?” Amaya asks, putting an arm around the tiefling.

Not expecting this sudden contact, Nasti almost recoils. “If you mean prevent it from being used by these gnolls, then yes, that’s exactly why we’re here.”

“No, we’re here to prevent this thing,” the half-elf pokes it with her sword, “from being used by anyone.”

“But who’s to say that it might not provide illumination in more … enlightened hands.”

“Provide illumination?” Nova says. “Nasti, if there’s ANY circumstance where that is beneficial, please share. It’s a gate to Hell…”

“Technically, to the Abyss. They just want to study it, Jenova. That’s all. There’s so much they stand to learn from it … so much I have to gain from sharing it with them.”

“Now THAT makes sense. It’s valuable and you can profit from it. Do you really even trust these people or is it just better for you so you’re just ignoring the giant hole in the plan. You know – the one that leads to demons.”

“I think we should mention the obelisks,” Canter says.

“You would, wouldn’t you,” Nasti says.

“I mean. The Ca- Ahem. The Northerners asked good questions.”

“These Ca-ahem’s are not your friends,” Amaya says.

“Not YOUR friends, maybe,” Canter says.

Nasti pushes forward. “Isn’t it convenient that these obelisks appeared just when we needed them? They absorbed all this Abyssal energy, but where did it go? The stones aren’t even native to Golarion. In truth, we don’t know WHAT will happen if one of those gates is opened.”

“Okay,” Nova says. So, the obelisks need further study. I can get behind that. Is it the army that’s reached out to you? Or one of the ruling party?"

“Neither. They… they call themselves the Ebon Cabal,” Nasti says.

“So much for circumspect,” Canter stage whispers, earning another glare from his witch.

Nova looks blankly over to Amaya. “You ever heard of them?”

Amaya shrugs and nods. “They are a secretive sect of wizards housed in the Black Tower near the headwaters of the Marrilach River.”

“Mostly wizards, yes, but not all. Obviously,” Nasti says.

“At least one bard…” Canter mentions, earning yet another glare. “Fine, fine. You talk.”

“I’m just saying, let’s not destroy this thing yet. Okay?” the tiefling says.

“Nasti, this is the definition of sketchy,” Nova says. “What authority do they have? Who holds them accountable if they blow up the valley with their experiments? Does Chendrea approve?”

Nasti’s eyes narrow, and her tone is ice cold when she says, “IF it’s ANY of your business, it was HER meddling that put me in contact with them in the first place.”

“That didn’t answer my question,” Nova says. “And you’re right, that’s not my business. But this thing sure as hell is. It’s the business of everyone in the Valley.”

Nasti steps away from the contraption. “Fine. Blow it up, then.”

“Such a waste,” Canter laments. “Ah, well. Willful ignorance is the natural state of mortals.” He flies up to curl around Nasti’s shoulders.

“I never said I wanted to blow it up,” Nova says patiently. “I said I wanted to disable it. Remove any risk of something going horribly wrong with it until it is safely in the hands of the people who actually protect this Valley.”

“Fine. Do as you will. I’m sick of always being wrong.”

“I have to say I’m curious at what they offered to get you so interested,” Nova says. “You deceived us by coming in here with an ulterior motive. You could have come to us … right?”

“I came in here with a more specific motive: to keep these people from using the Gate. And coming to you defeats the purpose of being in a secret society, but I can’t even do that right. As for what they offered me, Nova? Knowledge and power, of course. Knowledge and power.”

“Fair. I thought we were doing that together already.” She frowns “I’m sorry you are stuck between them and us.”

Amaya draws their attention when she cuts down one of the heads, which promptly stops chanting. She continues the gruesome task, and each head stops chanting in its turn. Then she checks the drawer and finds a spare head – likely storage if the device needs to be relocated. “Should we move this thing?” she asks, reaching towards the floating piece of obelisk.

“Not without knowing what that will do first,” Nova says.

“Miiight not want to touch that,” Canter agrees.

Amaya’s eyes widen as she stops short of touching the stone.