The cousins spread word of the possibility of wererats in Sumberton to their respective areas of influence. Amaya informs the military through her father, Nasti tells Chendrea and some of her seedier contacts, and Nova reaches out to Vintra Marktunsel and Thrann Carstellan. Thus informed, various agencies in Sumberton mobilize, and within a week, the lycanthropes are captured, killed, or forced to flee the city. Those captured confess that some of their number left to aid dark elves lairing beneath the Surrinak Hunting Lodge.

Based on this testimony and the cousins’ own findings, the Luminous Order makes a move on the Temple, with Sumberton’s backing. The Surrinak patriarch is arrested, pending further investigation into any connection between the noble family and the demonic facility beneath their lands. The city would happily have taken the Surrinak holdings, but the Order counseled prudence, letting an innocent Surrinak heir take charge of the estate.

Regardless, everyone in the Valley knows the cousins’ names and their connection to the Surrinak family’s loss of influence and status in the region.

Amaya travels down to the Shining Citadel with Armin Harrak, to make her bid to join the Luminous Order. Nasti heads north with Naryalla to meet with the half-elf’s magic-inclined associates. Nova remains in Sumberton, working with Calamity to soothe Jamil’s ire at having disappeared for over a week. He is more than satisfied with the increased crowds due to Nova’s recent extracurricular celebrity.

Nasti returns to town first, remaining cagey about how she spent her time. She does mention that the organization of lore-enthusiasts is more interested in the Obelisks than the Slaughtergarde fragments, but she does not elaborate further. Then the tiefling disappears into her shop and her new relationship with Chendrea, and Nova doesn’t see much of her for the next few weeks.

Amaya sends a letter back from the Shining Citadel, noting that the Order priests have cast divinations that revealed the existence of a third Slaughtergarde site, but so far not the location. The half-elf arrives back in Sumberton not long after her second missive forecasting her return. She tells her cousins that she is a newly minted Luminary Captain then throws herself into her role as a liaison between the Order and Sumberton.

With Naryalla back in town to distract Jamil, Nova spends more time with her mother, discussing their work together, the family’s ties to lost Lirgen, and her own oracular Blessing. She has an uncanny experience one day with a black butterfly, following its flight into the evening. When it remains visible against the starry sky, Nova swears she sees it momentarily grow into the silhouette of a woman with butterfly wings, blocking out the stars. For some reason reminds her of something she experienced in her vision, which has not faded over time. The seers spent so much time considering the stars that they forgot about the dark between.

Nova asks her mother about the experience and the older woman suggests it could be the influence of an obscure entity known as the Black Butterfly, known to oppose the ineffable denizens that dwell within the Dark Tapestry. With the possibility that her Blessing may have come from this being, she resolves to meditate upon it and research what she can to learn more about the goals and motivations of the Silence Between.

Three weeks after Amaya’s return, she receives word from the Luminous Order about a development in the search for the third Slaughtergarde site. It is believed to be an Armory, and the priests have learned that dark forces are trying to repair a gate to the Abyss. She is asked to gather her companions and meet at a camp on the west side of the Slaughterscar. She reaches out to her cousins, who meet her at the Sly Wink to discuss. Nasti has a private conversation with Naryalla before returning and announcing that their tab is paid for the evening.

“It’s Gnolls,” says the field commander when the cousins arrive at the camp near the Slaughterscar.

“Gnolls? In the Armory?” Nova says.

Nova looks at her cousins. “Can gnolls cause darkness? No? No… Okay, good.”

“Not necessarily, but I have a dispel prepared just in case.”

“What do we know about gnolls?” Nasti asks.

“Gnolls are hyena-headed humanoids with clan-like societies, who worship demons and hunt in packs,” Amaya recites. Her cousins look at her strangely for a moment. “What?” she says.

Nasti shrugs. “It makes sense that more demon worshippers are poking around these sites.”

The soldiers lead the trio to the entrance that has been discovered. Surrounded by twisted vegetation and tainted earth, a dark cave opens into the western side of the crater, and a tunnel winds downward. Signs of excavation, such as piles of dark dirt, stand nearby as proof of recent activity in the tunnel.

“We’ve caught sight a few times, coming and going,” the soldier explains. The cousins thank him and begin their descent.

The gravel-littered tunnel spirals steeply downward from the surface for five hundred feet until something blocks their path. In the red glow issuing from a giant beetle in a cage near the northern wall, they see three gnolls wearing hide armor and wielding large curved swords. They stand in front of a wooden stockade. Double doors with massive wooden handles are built into the middle of the stockade. Those doors have a stylized three-eyed hyena painted across them in red, along with the threat: “Turn back or die!” painted in Common.

Nasti and Nova step lightly, but Amaya proves incapable, drawing the attention of the guards. The cousins make short work of the first gnoll, but the survivors rage and flank Amaya, game to put up a fight. She is struck only once but solidly. One of the gnolls peels off to charge Nasti, but she evades his flashing blade and gnashing teeth. The gnolls do not survive the next few moments.

“I think that little break did us some good,” Nova says, a little wide-eyed at their handy victory.

Nasti steps over the one at her feet to get a better look at the symbol painted on the doors. It is clearly a modified symbol of Lamashtu, the usual jackal head replaced with that of a hyena – like the gnolls themselves. The orientation of the eyes reminds Nova of the glowing “eyes” she saw in her vision, and the human frowns at the memory and implications.

Amaya searches the bodies, frowning at some strange vestigial tendrils hidden in the matted hair around their throats. She shrugs at this oddity, relieves all three of their lightly enchanted blades, and places the magic weapons in her bag of holding. She then bandages the cut she took from the gnoll and glances through the crack between the doors.

More glowing beetles in cages line a broad hall, which leads to another wooden stockade, though this one has a portcullis in the center. She spots two more gnolls over the top of the fifteen-foot wall, with longbows visible. She tells her cousins.

“So, you go first is what I’m hearing,” Nova whispers. “We’re right behind you.”

Amaya nods, kicks open the doors with a loud creak, and charges towards the portcullis. Fifteen feet in front of it, the floor gives way and she twists in mid-air to arrest her fall with a one-handed catch. She glances down into the twenty-foot-deep pit and exhales in relief. It is short-lived as one of the gnoll archers puts a pair of arrows into her before Nova’s ray of frost catches it in the side of the head.

The second archer is unable to use the longbow effectively against so near a target, so after a couple of failed shots, he drops out of sight. Nasti follows Nova’s ice with fire, burning the visible archer. Then a third archer appears where the second once stood and puts a pair of arrows into the tiefling. Amaya clambers out of the pit, moves up to the portcullis, and lifts it by main force. The gnolls blink.

The spell-struck gnoll scrambles off his perch to bring a battleaxe to bear against Amaya, but she shifts ever so slightly, and her enchanted armor absorbs the attack. Nova heals Nasti with one of her new wands and hustles forward. A second gnoll forms a furry flesh wall against Amaya’s onslaught, but cannot score a hit against the half-elf.

Nasti moves up and hits the gnolls blocking Amaya’s path with an electric arc, rattling their teeth in their heads. The archer remaining atop the stockade wall continues shooting at her, sinking another arrow into the tiefling. Amaya kicks a gnoll back and follows her own momentum through the portcullis, which falls shut behind her. Then she ends its life on the end of her magic blade.

Nova heals Nasti again, continuing forward, and the gnoll axeman continues to struggle against Amaya’s defenses. The tiefling maneuvers to get a sightline on both gnolls, dealing more electrical damage to the hyena-men. The archer missed Nova with a trio of arrows, and the enemies did not last long after that.

Amaya finds the crank that operates the portcullis and lets her cousins through, though she gestures for them to remain quiet. At their puzzled looks, she points to a massive giant with thick, gray skin chained to the northern wall. Its clawed fists are each as big as a man, and its torso is a mountain of muscle. An iron helmet with a closed visor and no eye slits covers the top of the brute’s entire head. The monster is manacled to the wall by an immensely thick chain that is too short to allow him to move far. 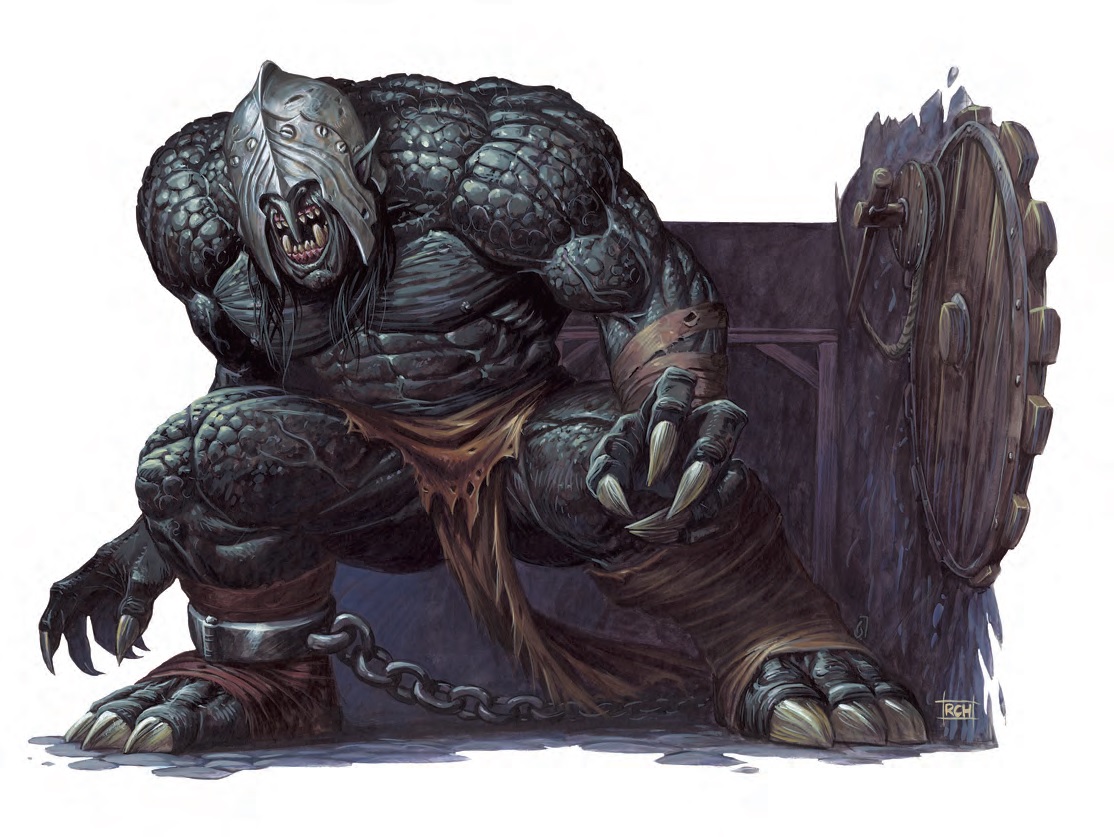 “What in the world is that thing?” Nova whispers incredulously.

We've already been saving your edits, so if you upgrade now you will have instant access to your previous versions. Plus, you get a 15-day free trial, so there's nothing to lose.

Interlude: The Return Amaya notifies her cousins of her return.

Interlude: The Letter In which Amaya writes to Nova, Nasti, and Cantor