“Let’s get at it, team,” Canter says as the cousins descend the stairs into the Temple. “I have a good feeling about today.” As they step into the entry chamber, the familiar says, “Good feeling’s gone.”

Someone has raised the half-drow guards as zombies, and the pair lurches toward the party. One of the undead scores a lucky blow against Nova before the cousins put them back down.

Nasti notes one of the deep gnomes standing in the pool at the intersection in the southern hall. She squints then announces, “That one’s dead, too.”

“That spider lady must have been pretty pissed that we almost killed her, huh?” Amaya says.

The trio of ex-svirfneblin didn’t last much longer than the former half-drow.

Nasti and Nova spend some time near the stairs treating the human’s wounds while Amaya examines the zombie bodies. “Someone killed them with magic while we slept,” she says.

“Do we want to survey this area we haven’t explored, or try to secure the places we’ve already seen?” Nasti asks.

“West or south?” Amaya asks, noting the doors in the former direction and the illusory demon arch in the latter.

A scorpion with a charred carapace emitting vision-warping waves of heat skitters among the statues in the western room. In the northern section is a massive sarcophagus with a marble statue atop it of a cloaked figure wielding a scythe and riding a horse that has fiery hooves. In the southern part is a collection of macabre statues, most depicting fiends. Two fiery demon arches are in the southwestern corner. Near these appear to be chests and scattered coins. 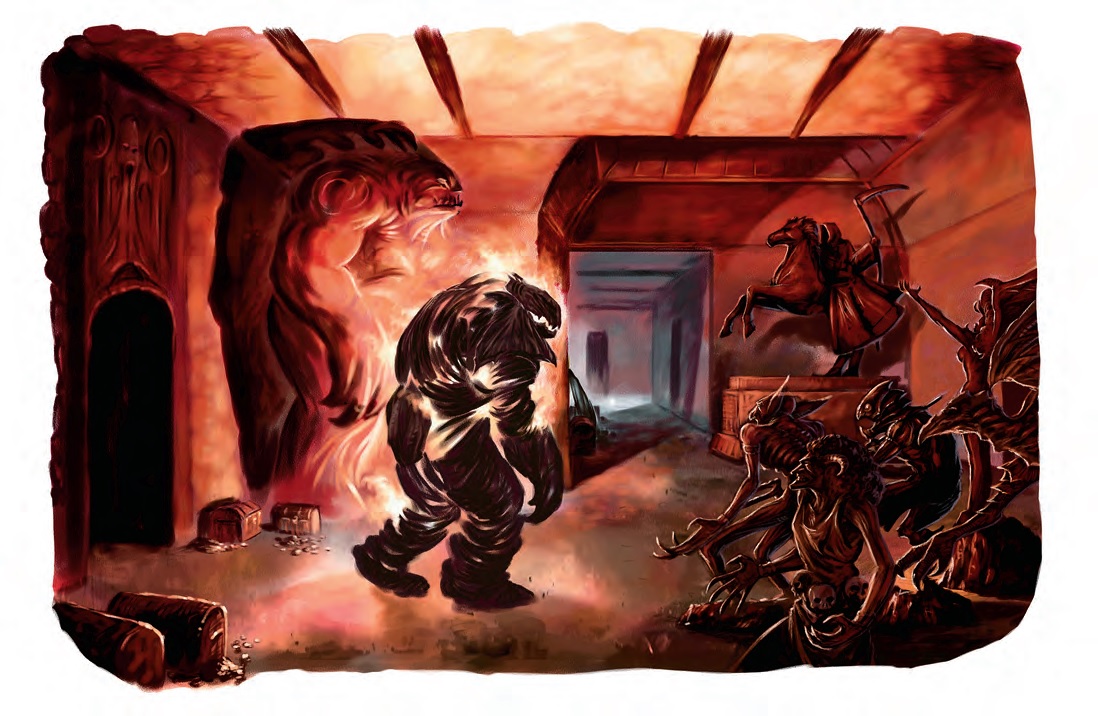 Mosaic footprints lead from the doors in the east past the sarcophagus and up the northern corridor.

Amaya engages the scorpion monster with a fierce overhead chop. The creature responds by clamping her in one of its pincers, and she only narrowly avoids the first thrust of its barbed tail.

“Magma scorpion,” Nasti says of the elemental arachnid as she enters the room. “Weak to cold, for what it’s worth.” Catching a glimpse of a pair of undead lurking to the north, she adds, “Pretty sure those are wights over there.”

Nova takes the news in stride, drawing up beside Amaya and releasing spell energy to allow her cousin to escape the scorpion’s claw. Rather than free herself, the half-elf continues to slash at the scorpion, but her grip is awkward. The heat emanating from the monster sears her flesh.

Since it still has her grabbed, the scorpion plunges its tail into Amaya twice in quick succession. She manages to withstand the venom it releases with each thrust, but it doesn’t feel great. Nova shakes her head at her cousin but sends healing magic to soothe her pain all the same.

Nasti, heeding her own note, lances the magma scorpion with a ray of frost, which sizzles as the cold impacts the creature’s carapace. Amaya slips out of the pincer courtesy of Nova’s magic and brings her blade down again hard. She still burns a little from the heated claw but manages to douse the flames.

Unfortunately, the scorpion seizes the half-elf once more and impales her with its tail yet again. Still, she does not succumb to the venom. Nova sighs and heals Amaya again, and Nasti lances the magma scorpion with another icy spell, finishing the elemental monster off.

“We should probably deal with the ghoulies,” Nova says, glancing north.

“Are we up to it?” Nasti asks, even as Amaya stalks toward the undead.

Two pale drow with burning red eyes menace the cousins from the corner of a sizable alcove in the western wall. Beyond the drow are three large frescoes depicting disturbing images. The painting on the northwestern wall depicts red dragons and winged demons soaring over a city. On the western wall, two marilith demons have their arms and tails intertwined. Angels hanging from gallows and chained to torture racks are shown to the southwest. A demon arch filled with violet energy thrums in the wall to the east, and clawed mosaic footprints run down the hall’s center. 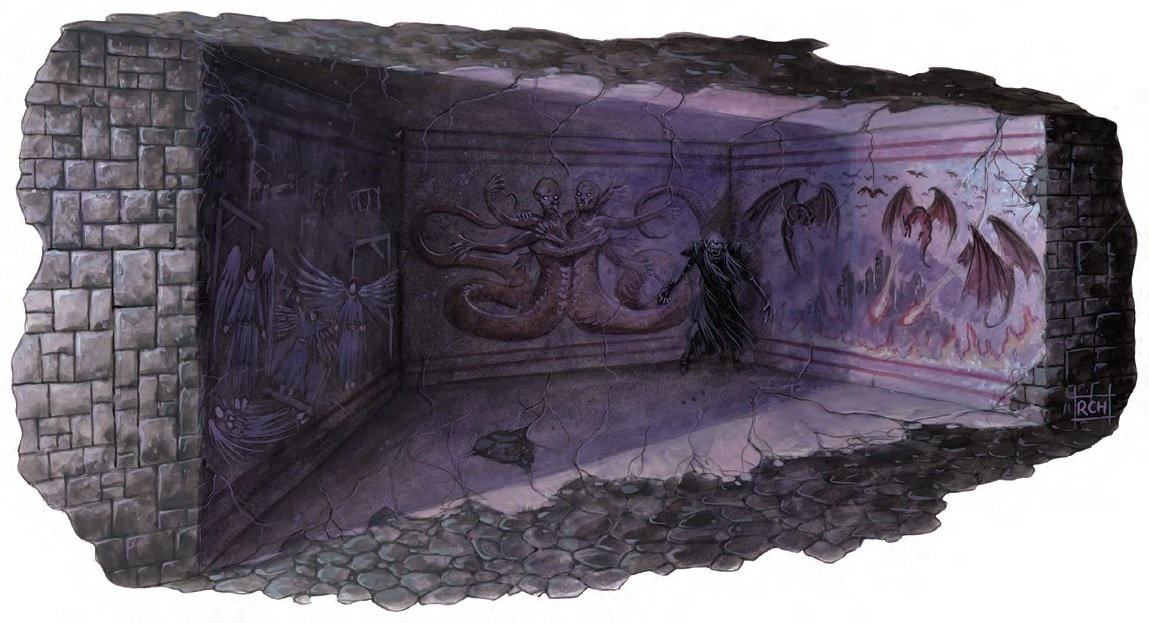 The wights leap to attack with fists that threaten to drain life essence. The creatures get another couple of similar hits in before the cousins destroy them. While Nasti tends to Amaya’s wounds, Nova inspects the open chests of gold coins. However, upon picking up one of the coins, it disappears in a flash of baleful green light accompanied by a scream of agony. Nova is momentarily blinded by the flash and her head reels in pain from the sudden loud noise.

“I hate this place,” Nova says.

They opt not to touch the rest of the “coins” and inspect the statues instead.

A large toad-like creature with an immense maw and spines running down its back is identified as a hezrou.

A beautiful, bat-winged woman remains a mystery to the cousins, though two-thirds of them are Definitely Interested.

Another statue depicts a blood demon – a gaunt creature with vicious fangs and a curved horn rising from the back of its head.

A distorted version of a human woman that has warty skin and clawed hands they believe to be a night hag.

Finally, there is a statue of a wrath demon, also known as a vrock, which is a large vulture-headed fiend with wings, wiry limbs, and long claws.

The statue atop the sarcophagus stretches nearly to the ceiling, the rider’s mount a fiendish horse-like beast known as a nightmare. An inscription is carved around the base of the stone casket in a jagged language, drawing Nasti’s attention.

“It’s Abyssal,” she says. "’Here lies Goramnus, harvester of good and evil alike. Fight well for Slaughtergarde, lest he awaken and find you unworthy.’”

“Let’s not kick that hornet’s nest, shall we?” Nova says.

Nasti nods. “Not a chance.”

Amaya passes through the violet miasma into what must once have been a private library. Two female drow in robes and chainmail stand before the racks of scrolls that line the walls of this room. On the eastern wall is a massive iron chair, bolted to the floor and buttressed with thick beams. Loose pieces of parchment litter the floor.

“This must be one of the invaders that caused this mess,” one says to the other, sounding weary.

“What mess?” Amaya asks. The dark elves snarl in response and she wastes no more time on banter.

An early darkness spell threatens to put the cousins back on their heels for a moment, but after Nasti dispels it, the priestesses fall swiftly. “Aww, I wanted her to chase the tracers a little longer,” Canter says, referring to the hallucinogenic effects of his breath weapon.

The wooden racks hold hundreds of scrolls in disarray, some lying on the floor, others burned, and still others torn apart. Amaya and Nasti examine the scrolls, but predictably, only the tiefling can read any of them. “More Abyssal,” she muses, looking over a few. “The names of all the cultists, mercenaries, and other evildoers who fought for Slaughtergarde when it came to the Material Plane.” Amaya pockets some of the scrolls, thinking to hand them over to the Luminous Order.

“We shall,” Amaya says, leading her cousins north to the double doors.

Beyond lies the shrine where they encountered Lanthurrae the day before. The drider’s corpse lies in the middle of this octagonal room. To either side of her are rotting male drow warriors in scale armor – her risen honor guard.

One of the zombies gets a lucky hit on Amaya, but the undead are otherwise dispatched with little trouble.

“Is anyone else very thankful that SHE wasn’t raised to undead?” Nova says, pointing at Lanthurrae. Her cousins nod agreement, and the trio inspects the chamber in more detail.

Four altars are evenly spaced around the walls, and each has a statue that depicts a hideous, bent elderly woman leaning on a crook. The exact pose of the statue varies from altar to altar, but each statue has a silver bowl at its base.

With a shrug, Amaya picks up the necklace, which she estimates to be worth about fifty gold! When nothing bad happens to the half-elf, Nasti opens the box she found in the southeast bowl. Unfortunately, yellow mold explodes outward when she does, threatening to choke the tiefling. She survives the poisonous mold, and the cousins are reminded to be a bit more cautious.

They collect the rest of the treasure, including the items on Lanthurrae’s body before considering where to go next.

Session 16 Fire Walk With Me