In Which the Cousins Break Bread

The cousins descend to the room where the hobgoblins had been sitting while the goblins start packing. A table here has a stool at either end, as well as a pile of bolts atop it. Unusual tools are mounted on the walls, a bloodstain running from each to the floor. Channels around the edges of the room lead to a drain in the center, suggesting it was once an operating theater. Or a torture chamber.

Mounted on the walls are scalpels, daggers, forceps, and light hammers. The scalpels and forceps seem to be seeping blood. When asked, the goblins comment that they assume the implements to be cursed. Each was clearly magical, though the only purpose appears to be to look creepy.

Cautiously exiting the door through which the hobgoblins had, you enter a hall that turns south. An open panel on the west wall near the doors to the south shows a simple lever in the down position.
Closing the panel shows that it would be hard to spot if you didn’t know it was there.

As the southern doors open, flame ignites atop six tiny copper braziers resting in holes cut into an equal number of short partitions jutting from the eastern and western walls of this dusty room. In the illumination they provide, the cousins see that roughly parallel scratches run along four sections of the floor, perpendicular to the matched sets of copper doors on the north and south walls. The ceiling has four dark slots cut into it along matching paths, which are about 3 inches wide and run the length of the room. 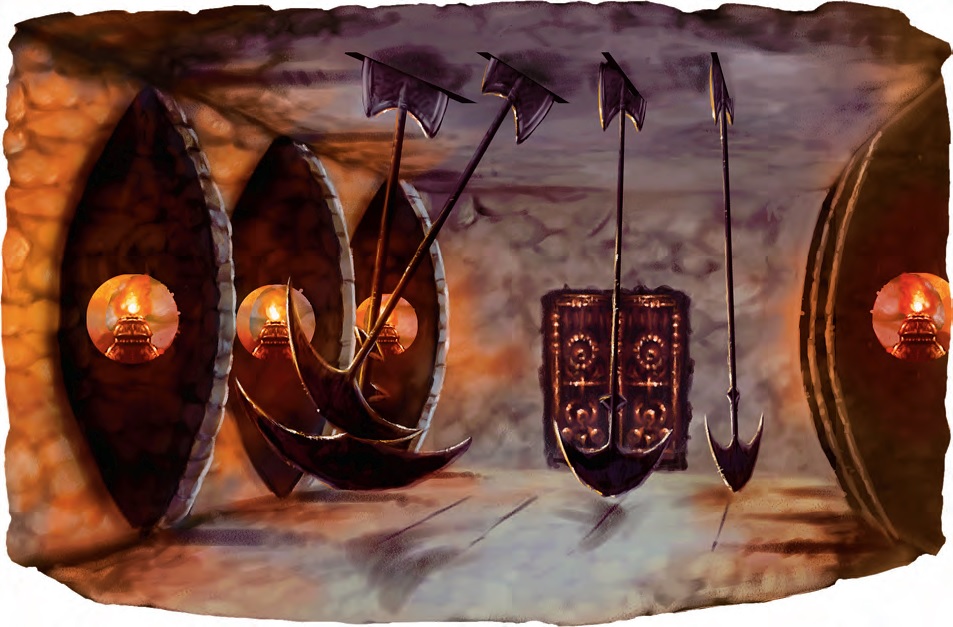 There’s no fresh blood on the floor, so the cousins figured that the hobgoblins disabled the traps here with the switch in the hall to the north. Passing through, they open the doors to see three relieved looking goblins, though Jikki has the beginning of a black eye. The goblins explain that the hobgoblins came through, threatened them and hit Jikki, but then left without further violence.

All eight goblins are ready to leave, so the cousins return to the entrance where the unconscious hobgoblins still lay in a pile on the archer’s nook. Nova sighs and reaches for her staff, sending a wave of healing energy out that refreshes everyone. Jikki rubs his formally bruised eye in wonder as the hobgoblins regain consciousness.

Jikki quickly brings the hobgoblins up to speed on what has happened and mentions the need for strong backs to haul the crates back to the surface. The hobgoblins absorb all of this information with relative grace – Kurm is shocked to be alive after he was sure he burned to death, and the female archer Kri sticks close to his side. She seems conflicted but mostly grateful that they are all still alive.

The un-looting of the Chicane Guild crates proceeds with little ado, and a few other crates get scooped up along with the others and loaded into the wagon. The other containers hold mundane trade goods, including wheat berries, cloth, feathers, tobacco, raw copper ore, and the like, and the cousins figure that Vintra can probably find a buyer for it, too.

It is mid-afternoon by the time the wagon is loaded, so the cousins host a meal in the shade at the edge of the canyon. Fiznip and Oznog are beside themselves with happiness that their brethren were rescued and Nambrakh was ended in such a short time. The hobgoblins are not best pleased to hear about the fate of their “weak” fellows who got turned into the undead. All the goblinoids agree that they are definitely better off without the demon-worshipping Nambrakh in charge.

The hobgoblins Bolly and Rigel tell ribald stories while Amaya prepares a simple lunch with the goblins, learning each of their names: Fiznip, Oznog, Jikki, Kiki, Mirro, Kirob, Makku, Jando, Rozi, and Chut. While they work, Nasti talks to the goblins about seeking non-raider gainful employment. The hobgoblins seem dubious about their prospects in town, so Amaya suggests maybe joining up with the National Army. The gods know that they could use all of the able-bodied soldiers they can get with things in the valley so bleak. And perhaps with hobgoblin soldiers joining, maybe others would defect from more lawless groups.

“Hey Nasti, you hungry?” Amaya asks. The next sentence she says in Goblin, testing out what she has learned.

Nasti laughs until she snorts. “I would have to be pretty drunk to eat yours, Amaya.”

“I know I’m not that great of a cook, but you don’t have to be rude about it,” says the half-elf.

“You emphasized the wrong syllable and told me your kee-kee was ready.”

“Kee… ooooh,” says Amaya, blushing as understanding washes over her. The goblins lose their minds laughing. Even Kri and Kurm crack a smile.

“So what ARE you cooking?” says Nasti.

“I could eat,” she muses. “Just a bite, though, I still have items to identify and what-have-you.”

Nova eats twice as much as everyone else. She’s the girl that eats and eats and never gains weight, especially once the curse took hold. Nasti watches the human’s metabolism at work, her half-lidded eyes blazing yellow with envy.

After eating, the goblins teach the cousins how to play Harrow-Poker. Kiki gets caught cheating and squabbling ensues. During the fracas, Amaya picks up a few words in the Goblin tongue, though Nasti smirks at the certain translations for some reason. Nova makes an idle comment about fortune-telling, and the goblins are very interested in knowing the future.

The oracle demonstrates the proper use for a Harrow Deck, leaning more into the presentation than the accuracy of her predictions. Kurm, she suggests, has the brightest future ahead of him, having been cleansed of his past in the flames of rebirth. He seems to take it with a grain of salt.

At the end of her predictions, Jikki gives her the Harrow deck as a gift from the goblins. She thanks them and advises them all to come with the cousins to Sumberton to apologize for the robbery, even though Nambrakh hadn’t given them much choice. She even offers vouch for them to Vintra, the Chicane Guild leader. The goblins assure her that they’ll consider it.

As the games continue, Nasti leans up against a tree and starts flipping through Nambrakh’s spellbook while feeding Canter bits of jerky. She seems increasingly agitated as she goes through the spellbook/journal, shushing any attempts to interrupt her until she’s finished with it.

“Nambrakh called this place the ‘Laboratory,’” she announces as she slams the book shut, drawing everyone’s attention. "It was used in the past for magical experimentations with an Abyssal bent, as you might have guessed. He thought there was still latent power in this place, and he couldn’t tap it. There’s also some stuff in here about a ‘shattered gate’ that was once used to open a path to the Abyss itself.

“That’s why he had our friends steal the spice crates; he was hoping that selling them would help him get rare or expensive reagents, to help his efforts.” She frowns. “All it says about the mystery buyer is that they’re ‘the dwarf.’” The goblins confirm that was all they’d heard about the buyer, too.

“But this shattered gate isn’t even the worst part,” she continues. “He says that someone else showed up here, claiming to be a representative of another demonic holding someplace else in the Valley. Now, this emissary person doesn’t tell Nambrakh where this ‘Temple’ is. He and his ‘bodyguard’ came in through the ‘back way,’ acting all curious, but Nambrakh doesn’t trust him. He doesn’t mention the emissary’s ancestry, but…” She takes a breath. “He calls him a ‘lavender bastard.’”

The cousins agree that the news isn’t great, and renew their intention to clear out the rest of the Laboratory the next day. To lighten the mood after such heavy proclamations, Amaya prompts Nova to lead the goblins in a singalong. The human smiles and obliges a gratefully participant audience.